Ohio Renaissance Festival - A Tale Of The Doctor And A Dalek 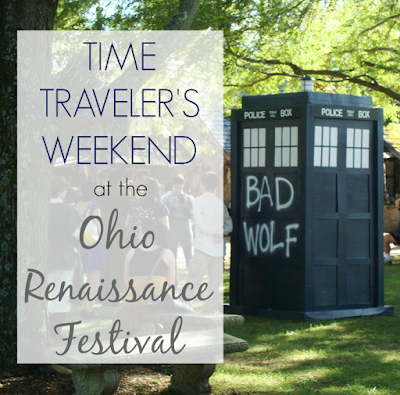 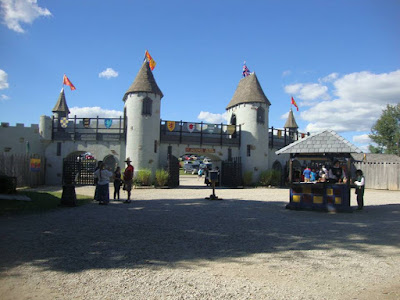 If you're hungry from all of the walking, there are a wide variety of foods to choose from, as well as drinks, including beer. There are games, contests, live music, and shows to attend. It's always a great time and I recommend attending as often as you can every year. The people are always so helpful and kind—there's never a frown in the crowd at the Ohio Renaissance Festival.
We're usually greeted by the smell of fresh bread bowls, roasted corn on the cob, and incense, but this year, it wasn't our sense of smell that was stimulated first. It was our sight! Near the entrance of the Ohio Renaissance Festival, there was not one, but twoDeLoreans. 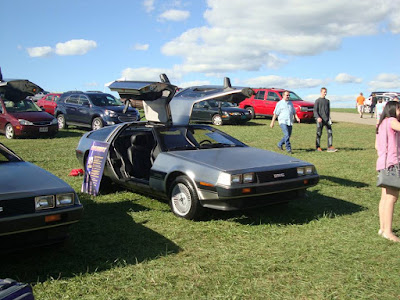 After standing around and admiring the cars for a bit, The Doctor and Dalek decided that they were ready to take on whatever was waiting for them inside.
The Doctor and Dalek felt like celebrities when we were immediately approached by several different groups, asking to take their photograph. They were a hit!

Once the Doctor and Dalek had decided they'd had enough of the ooh-ing and ah-ing, we began walking around, waiting to see what was in store.

After having only walked around 40 feet, there was a Battle of The Times; a Cyberman approached and teamed up with the Dalek to take on the Doctor! 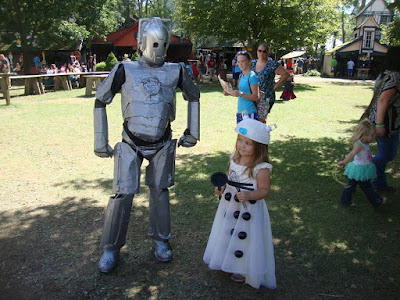 The Doctor soon realized he wasn't alone! His future self had come to help him defeat the Cyberman and Dalek! They both pulled out their Sonic Screwdrivers and the Dalek and Cyberman quickly backed off. 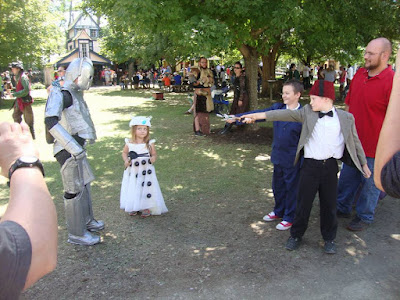 Not alone, indeed, thought the Doctor. Everywhere he turned, there was another version of himself! 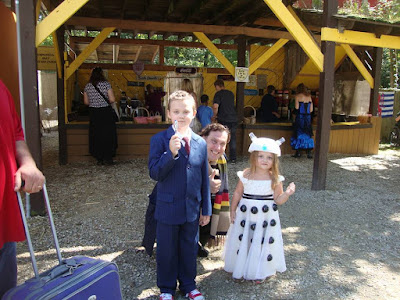 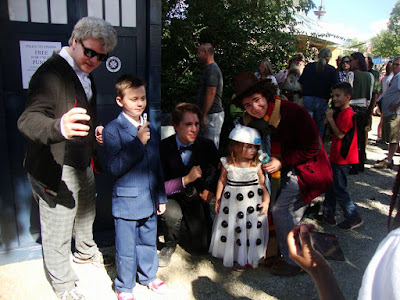 At one point, a past version of The Doctor landed his TARDIS and couldn't even get out because the peasants all wanted to know what was inside of the "big blue box." 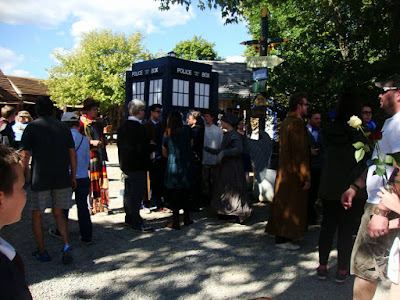 It was only later that we realized it wasn't the peasants that were preventing him from getting out; it was his fear of the Dalek with the mischievous grin on her face. 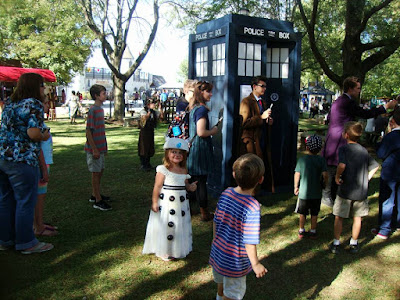 After getting tired of waiting for the Doctor to exit so that she could make her move, the Dalek caught wind that the Queen was near. If I can't get the Doctor, surely I can get the Queen! she thought. As the Queen approached, the Dalek ran up to her and shouted, "EXTERMINATE!" 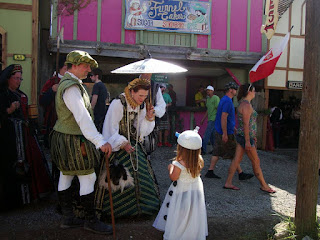 And then showed off her fairy stone. This was at the moment that the Dalek had a change of heart about exterminating people.
Excited because of the recognition she received from the Queen, the Dalek was feeling lucky and decided to enter the Costume Contest. 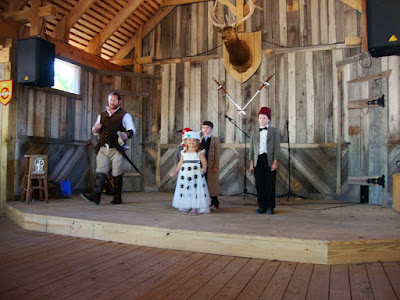 And as luck would have it, she won! 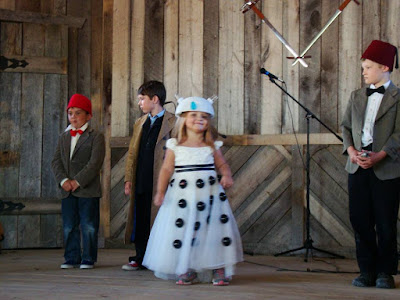 After the Dalek had won her Ohio Renaissance Festival hat, she joined the Doctor for more traveling. It was then that the Doctor ran into a Weeping Angel!
After not blinking for nearly two minutes, he finally subdued her with his Sonic Screwdriver while we made our escape! 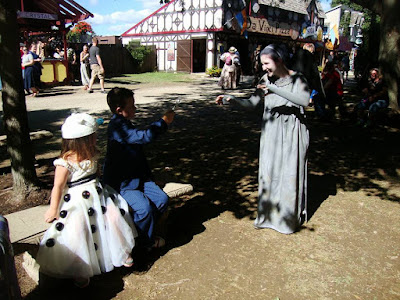 According to the Doctor, this was the safest place to hide. 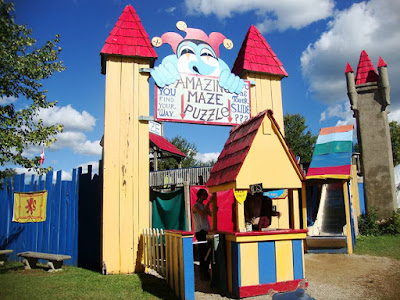 There was no weeping angel anywhere in sight! 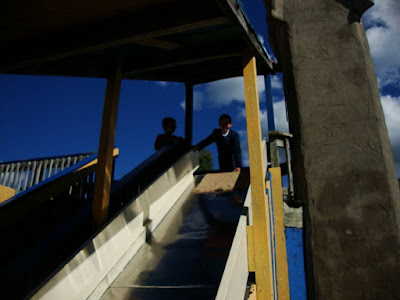 The Doctor decided that we could leave safely and then informed us that he was getting quite hungry and could go for a banana. But not before training just in case the Weeping Angel came back!
The Doctor practiced his archery skills... 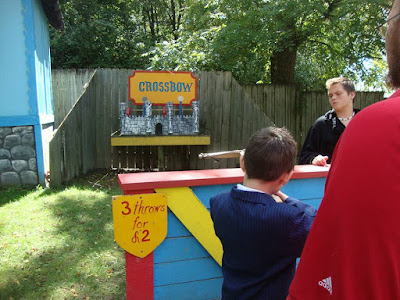 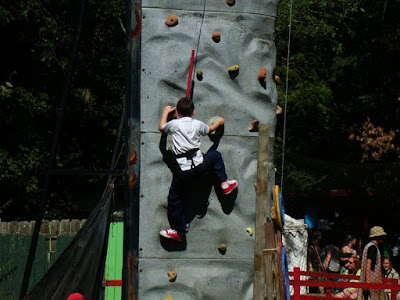 And tested his strength! He was quite strong, the Doctor. 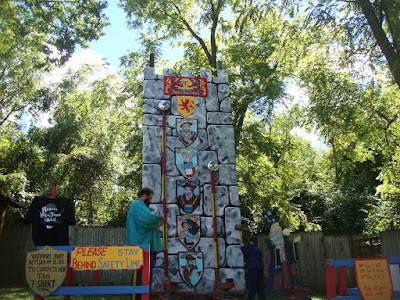 And lest we forget his frog-flipping skills, of course... 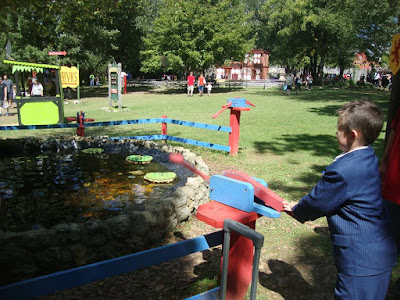 Because of all the love and appreciation she was receiving, the Dalek's "heart" began to soften. She decided to do some soul-searching. 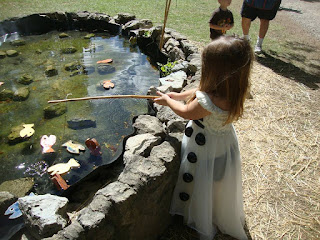 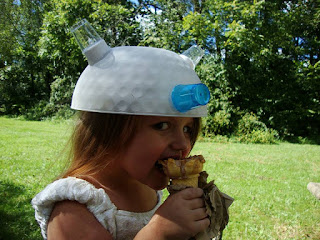 And then she cried about all the years she wasted exterminating people. 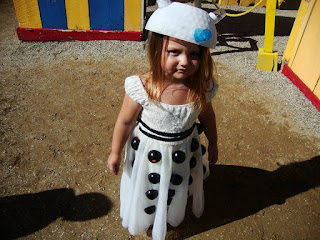 It was then that we decided it was time to eat. 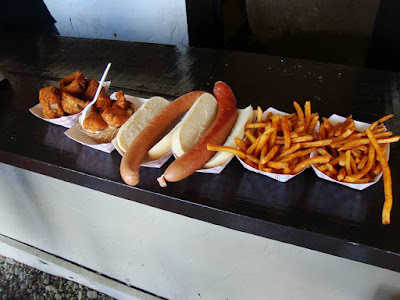 And we ate a lot.

After filling his stomach and not running into any more enemies, the Doctor felt that it was safe enough to return home. 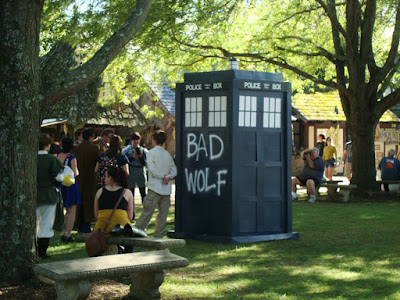 Time Traveler's Weekend was an absolute success this year at the Ohio Renaissance Festival! A big thanks to everyone who made it possible for us to attend, including US Family Guide!