Labor Day weekend we took a road trip to Cincinnati. One of the things we did while there was go to the Ohio Renaissance Festival. As I have written about several times before, both Alan and I love going to Renaissance fairs so we were both pretty excited. While sunny, it was a beautiful day - not too hot - and we were set to enjoy ourselves for a few hours. 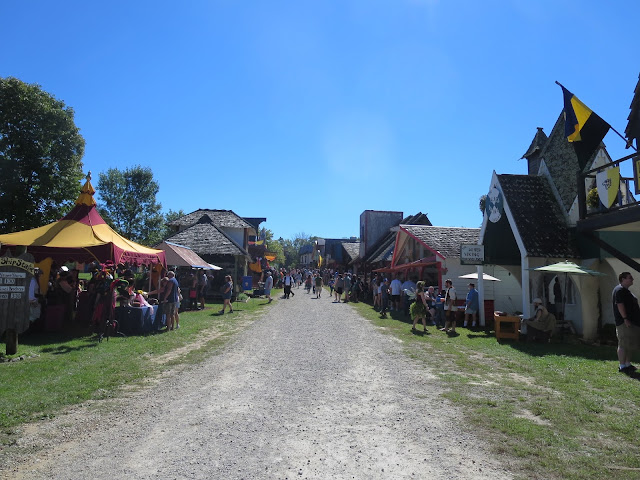 One of the things I loved about the Ohio Renaissance Festival is that it is relatively flat. I have been to a fair that was on the side of a mountain. I don't need to tell you how fun that was with a stroller... I also loved that this one had permanent structures, which included a castle, pirate ship and church in addition to the village. 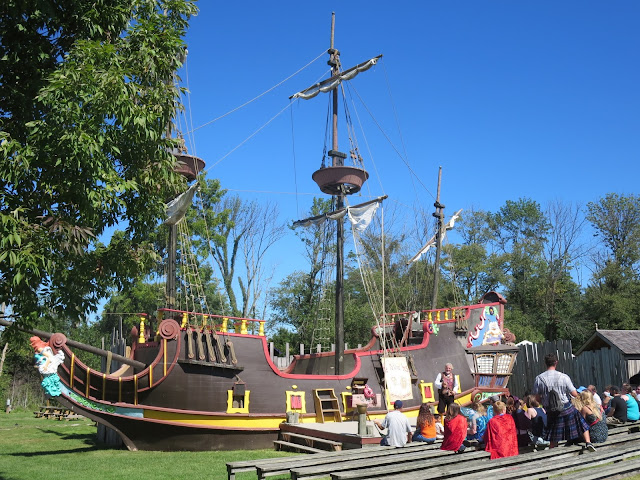 We missed the joust, but we got to see part of the pirate comedy show and a juggling act at the Washer Well, one of the numerous stages located throughout. Ewan was in a bad mood for most of our time there, but he loved this. It was one of the only times I saw him smile the entire day. 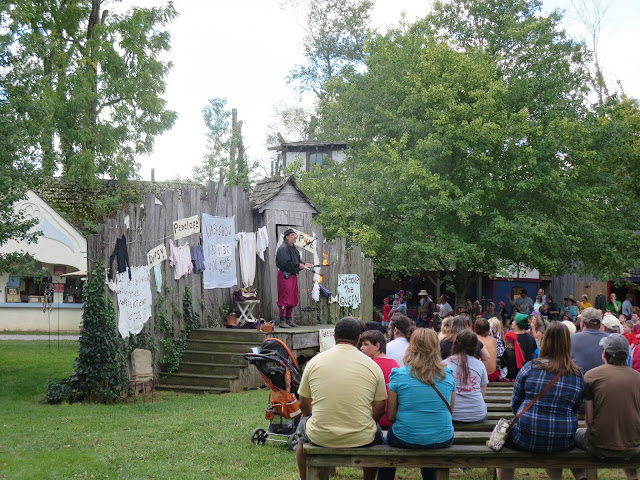 There are tons of shops, food booths and rides as well. I bought a couple metal butterflies for my herb garden - they're a great addition! And, the kids and I also went through the maze. The kids didn't want to ride any of the other rides, but they had a blast running through the maze and going down the slide at the bottom. Ewan is so smart - he's the one who found our way through. 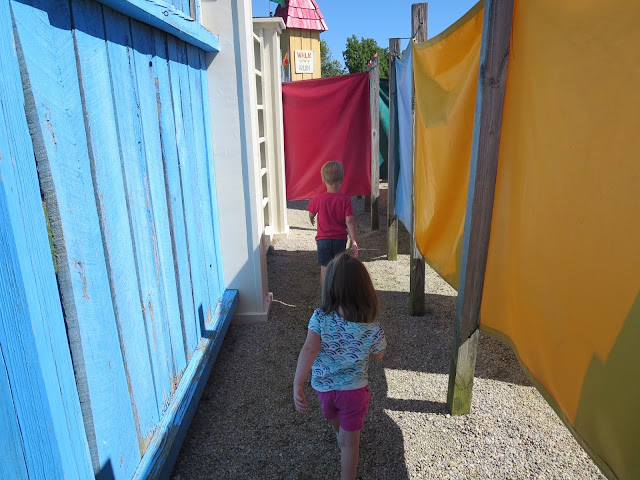 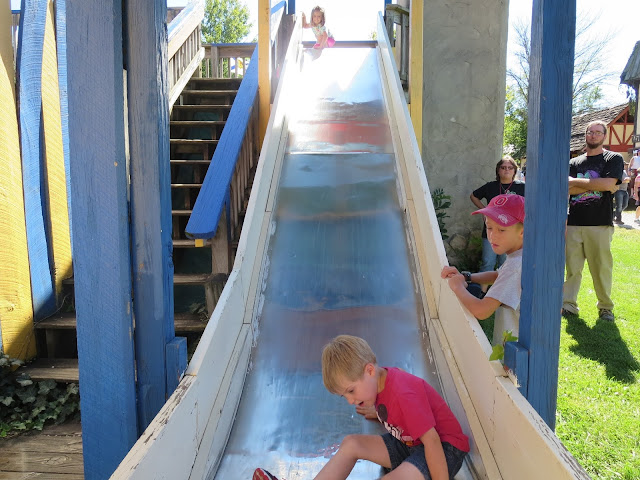 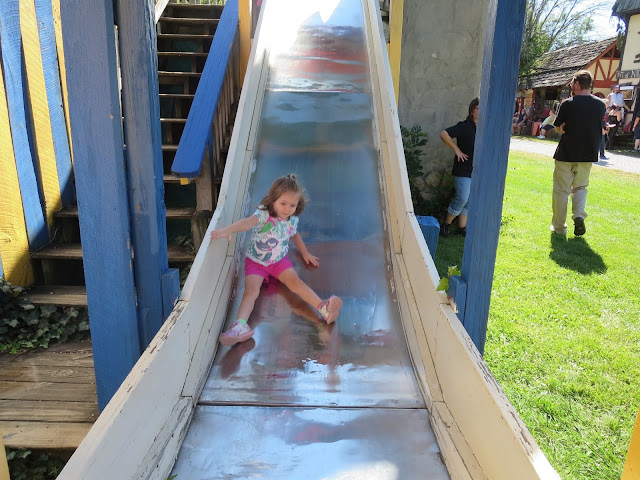 We got the kids their very own dragon eggs (geodes) that they were able to crack open. The guys running the booth were really great with the crowd and the kids. Props to them for being jolly! 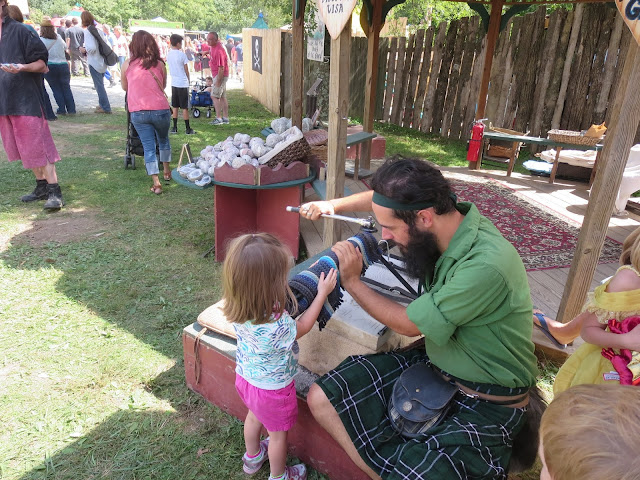 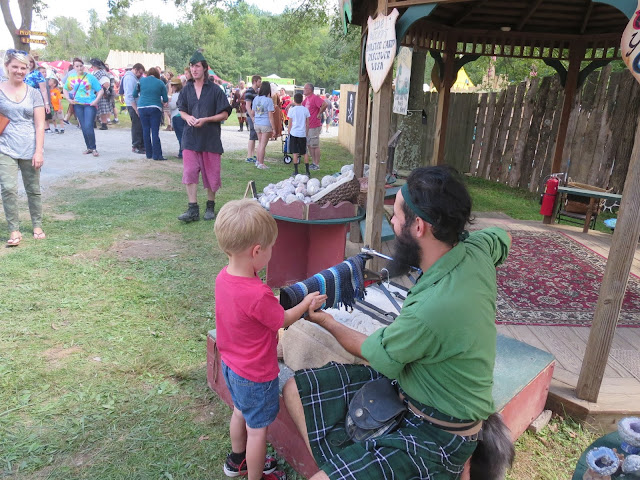 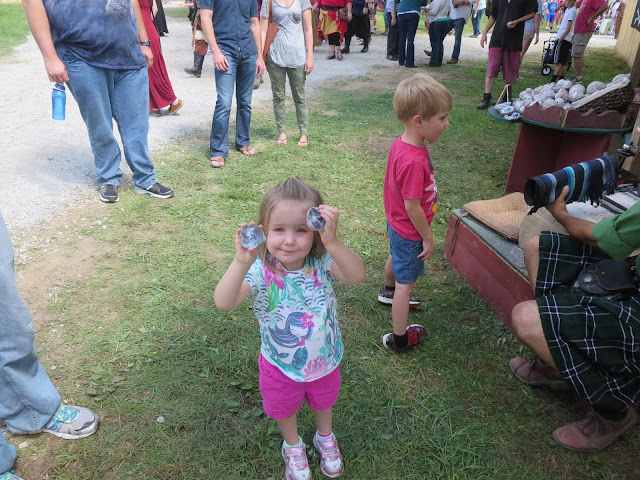 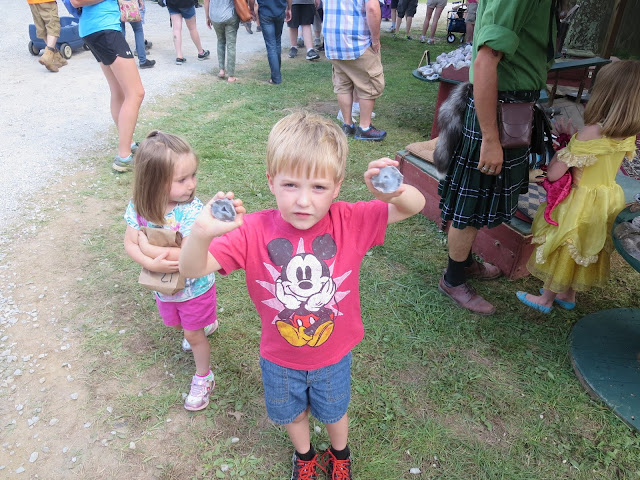 In the interest of full disclosure, I should mention the one issue I had while we were there and that was at the Jerusalem Cafe, which serves Mediterranean food. I ordered a wrap with meat, lettuce and tomatoes only. They made my wrap and right before the guy gave it to me, he smothered it in tahini, which I don't like. He seemed completely flabbergasted that I don't like it and wanted another one made. Which then had hummus on it, something else I don't care for. I tried to just deal with it and pick what I could out and/or scrape out the hummus. But I was left with very little food and just so grossed out that I wound up throwing it away. I guess shame on me for ordering something that required me to have to customize it. But when someone orders something with only "a and b," that really does mean only "a and b." What would they have done if I had a food allergy? Alan told me to just go get my money back, but there was a huge line and I didn't want to deal with it, especially since I had already had them remake it once. I was pretty upset about it though.
Even though there was a lunchtime snafu, here's a deal for you to have your own fun at the Ohio Renaissance Festival this season:
Get $4 off Adult and $2 off Child tickets by using Promo Code "castle" when purchasing on our secure website at www.renfestival.com. (or click here to print your coupon - I recommend purchasing online because the line to buy tickets at the window was insane!) Tickets good any day of the 2016 season (Weekends through Oct 23). Online discount only. Not good with any other offers.
Hope you have a great time!
This post is sponsored by the Ohio Renaissance Festival and US Family Guide. All opinions are my own.